In Australia, the Federal Chamber of Automotive Industries recommended the EV industry move to Type 2 plug by 2020 for AC charging (following European standards) and either CHAdeMO or CCS2 for DC charging.

Some early strata schemes had installed two different types of AC chargers in visitor spaces to cater for the Type 1 and Type 2 plug types. From now on, only Type 2 plugs need to be built into the EV charging infrastructure of residential apartment buildings in Australia.

Why is Open Charge Point Protocol relevant to a strata building?
The promise of Open Charge Point Protocol is that when the strata building moves to a “Smart Charging” network, the individual owners of electric vehicles will still be able to choose to purchase the charging unit of their personal choice (as long as it is OCPP compatible). Then different electric vehicle owners can have their charging units installed and connected into the same charging network. This means the Owners Corporation can ensure that all the charge stations “talk” to each other for the purposes of:
The following diagram shows the operation of charging stations from different charging station vendors, working in a single charging network with a Billing Service Provider (BSP) collecting payment from each of the EV owners. 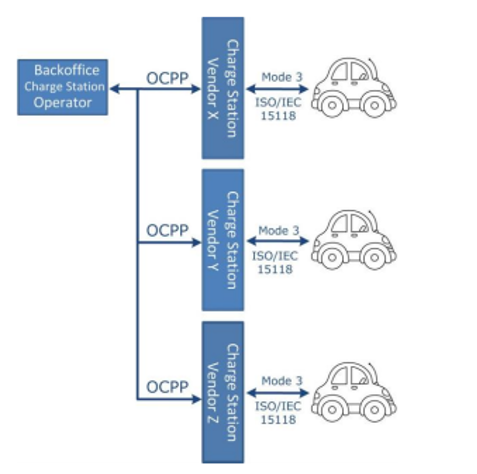 All strata schemes should be aiming to build an EV charging infrastructure which is OCPP compliant. The challenge is that this is still an immature standard and a number of chargepoints are marketed as being OCPP compliant, which might not interoperate with other chargepoints from other manufacturers or third party billing systems. Tesla Gen III chargepoints may be able to participate in an OCPP network via an over-the-air update in the future.

The current version of the standard which most manufacturers are building to is 1.6j. However, the standard for OCPP 2.0.1 has already been published and has functionality which is more important for residential strata buildings. For example, under OCPP 1.6j booking a shared chargepoint is only supported on demand i.e. making a booking immediately before the charging session is to occur.

In the UK, all chargepoints which are eligible for government subsidies for installation into homes need to be OCPP compliant chargepoints. Hopefully the Australian federal and state governments will follow this path.
​