The main components of a solar system include: 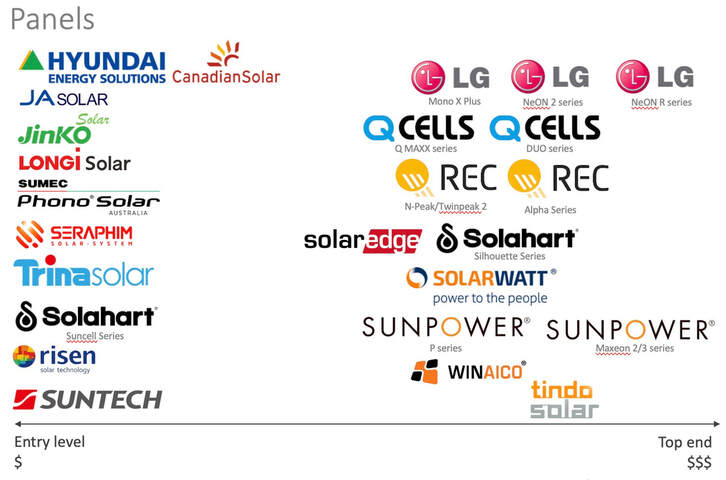 An innovative type of flexible solar skin is also now available in the market, from Sunman. This has advantages for installation on flat concrete rooftops, as it can be glued onto the roof, without penetration the waterproofing membrane. You may want to watch a video on flexible solar panels. When estimating the cost of a solar system for a strata building it is usually best to estimate based upon entry level solar panels. 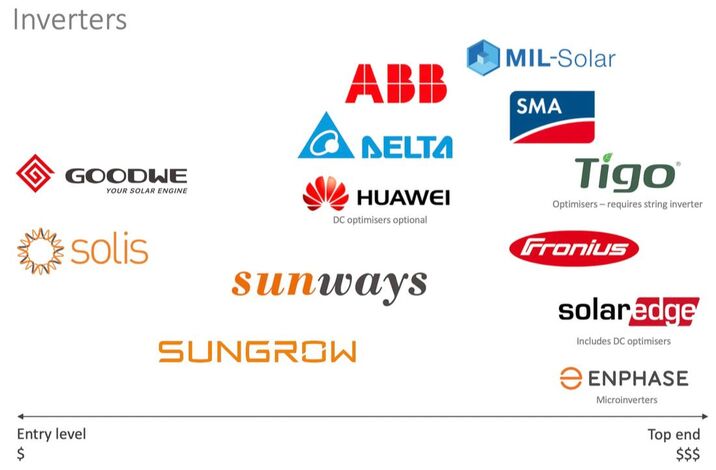 When estimating the cost of a solar system for a strata building it is usually best to estimate based upon a medium to top end inverter.
​ 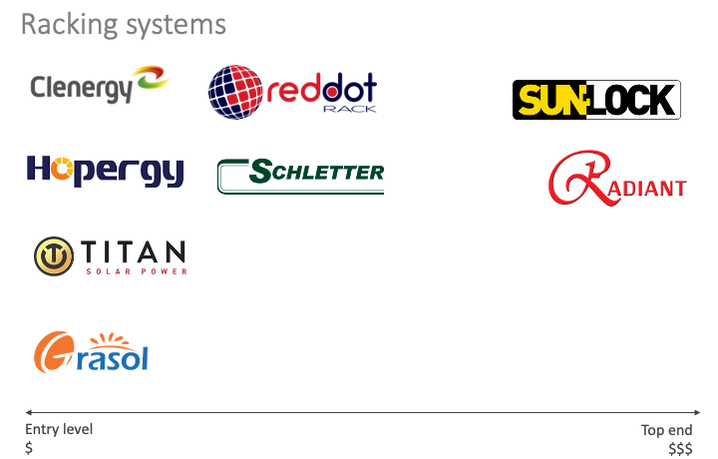 When estimating the cost of a solar system for a strata building it is usually best to use an entry level racking system.

The balance of system (BOS) includes wiring (DC/AC), Isolators (DC/AC) and monitoring systems as depicted in the diagram below: 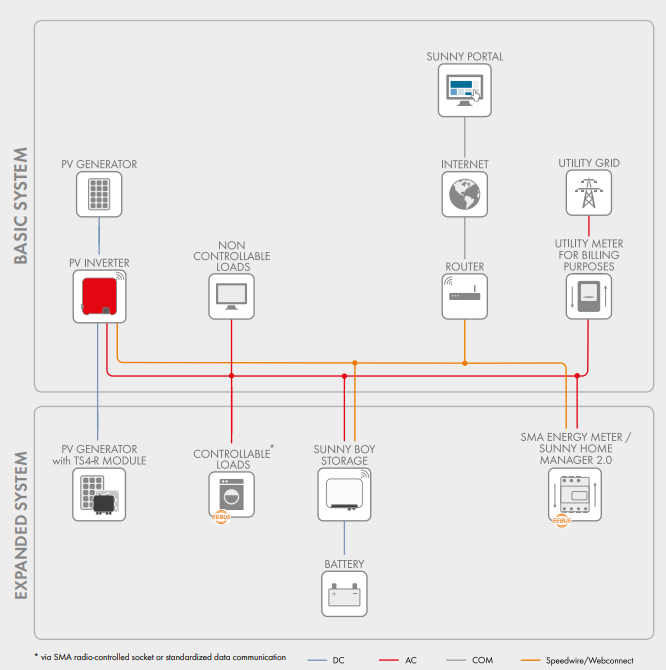 ​There are losses after the solar panels generate solar power, which is mainly due to heat loss. Other losses include AC/DC cable losses, inverter efficiency, dirt on the panels and the manufacturer's output tolerance. 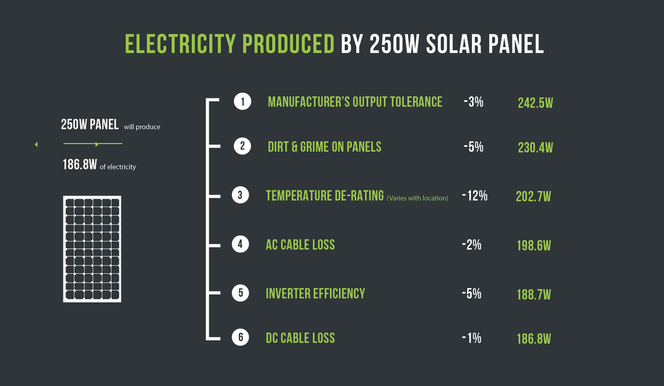 ​For this reason the system will rarely output the peak power of the system. This allows the inverter to be “undersized”. 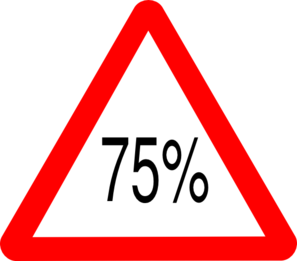 According to the CEC PV system design guideline “the inverter nominal AC power output cannot be less than 75% of the array peak power and it shall not be outside the inverter manufacturer’s maximum allowable array size specifications.”
Here are some examples:

The above losses are inevitable. There are some other losses which are not inevitable, such as shading losses. ​ For the solar panels that are connected in series, if one of the panels is shaded, it will affect other unshaded panels in the same string.​

To solve this problem, use either DC-optimisers or micro inverters to minimise the loss. 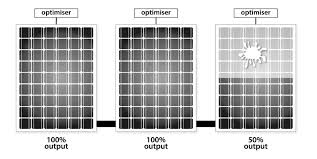 Location of inverter
The inverter should not be exposed to direct sunlight, direct rain, etc. If it is installed indoors, the space should be well-ventilated.
​
Location and size of battery
Batteries aren’t allowed in habitable rooms, ceiling spaces or wall cavities, under stairways or access walkways, on an evacuation route, escape route, or near combustible materials. The location needs to be well-ventilated. People intuitively expect there to be some simple ratio between the size of the solar system and the size of a battery system proposed for a strata. However, the size of a battery for a strata is based upon:
* Sufficient safe space for battery to be installed (lithium ion batteries are a type 1 fire hazard)
* Excess square metres of usable roofspace for solar beyond the square metres required for the optimally sized standalone solar system without a battery (i.e. is battery even viable with limited rooftop space?)
* Solar systems are sometimes limited to 100kW to capture upfront government rebates, where even a much larger solar system would not offset all the load of the building during peak solar generation, leaving little to no solar feed-in to fill a battery cheaply
* The most economic batteries available come in 13.3kWh units, so working with multiples of 13.3kWh batteries
* Solar feed-in (post battery) i.e. even after a battery is installed, does the battery capture all the solar feed-in during the sunniest days, or does some of the feed-in which can't be captured by the batteries available still spill into the grid during battery charging time
* Cost of electricity rates for the particular building (peak, shoulder and offpeak)
* Marginal utility of adding additional batteries to offset peak period OR peak + shoulder period OR all night time load 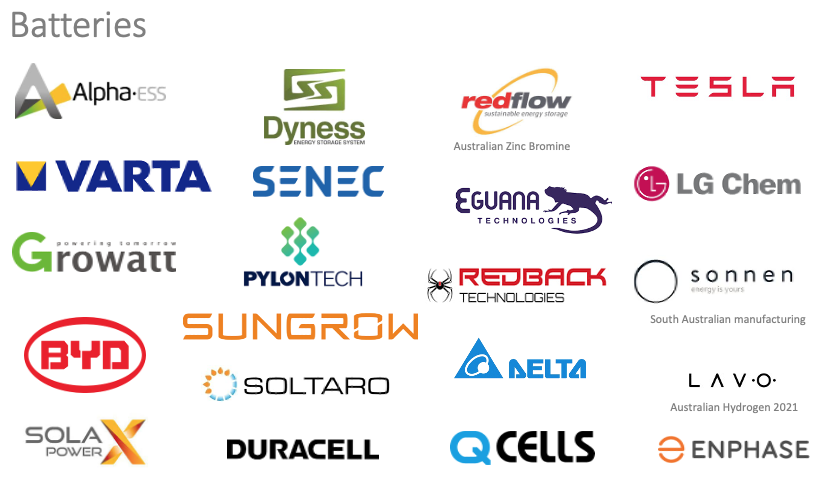 You may want to watch a video of Elon Musk at the launch of the South Australia Big Battery.
If you are interested to see original research with Griffith University into a comparison of Redflow Zinc Bromine batteries and lithium ion, you can read the overview poster here or the full research study here.  If you are interested in learning about the Lavo world first hydrogen battery developed in conjunction with UNSW, you can read an article from Intelligent Living here. UNSW has been doing world leading research into vanadium redox flow batteries since the 1980's and a good video of the researcher, Emeritus Professor Maria Skyllas-Kazacos is here. However, vanadium redox flow batteries are usually too large in size to be considered by residential strata schemes and are more suited for farms or large scale grid batteries. However, there is one vanadium redox battery installed in the Michael Crouch Innovation Centre at UNSW where Wattblock has been working.

Grid Protection
The grid provider (Distribution Network Service Provider or DNSP) requires extra protection gear for a solar system that is larger than 30KW AC  based upon inverter size). Most grid providers require 0 export for larger solar systems, which means even though your system generates extra solar power, it cannot be sold back to your energy retailer. An example of a network protection relay is visible in the picture below. 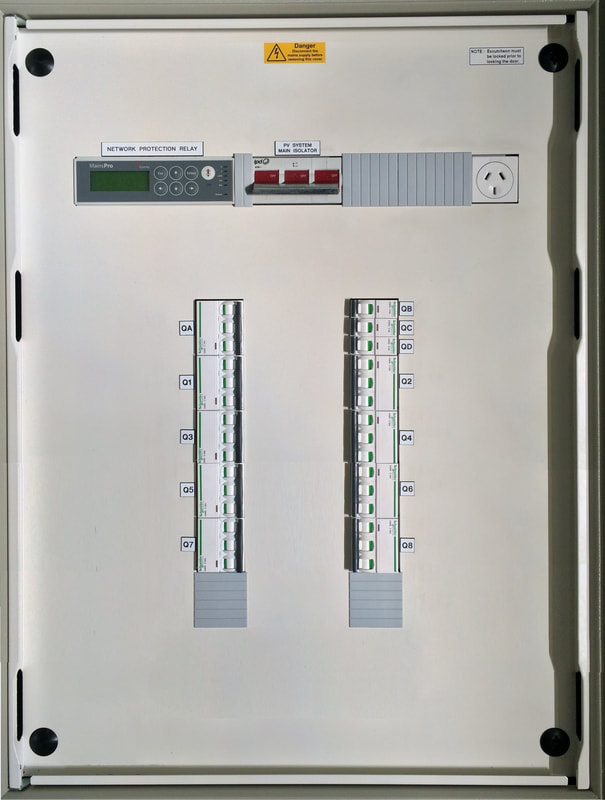